David Maney’s White Spots is not what you expect from a one-man show about multiple sclerosis. It’s more an experiment in form than an attempt to speak directly about his experiences. He doesn’t, or not in any straightforward way, tell us the story of his illness. He is more interested in exploring — nervy and fractured, energetic, playful yet insistent — new ways of structuring the affective flow. The result is a work that is erratic but enthralling, awkward but original, often evasive but everywhere full of courage.

What are white spots? They are diagnostics signs. Nerve fibres are protected by a layer of water-repelling fatty cells called a myelin sheath. Multiple sclerosis is characterised by the deteriation of this protective sheath. Excess water is retained in areas where the myelin has been damaged. This shows up on an MRI scan as a bright white spot.

Maney’s work is like an avant-garde autobiography, if it’s like anything. We know that Maney has multiple sclerosis and this gives his story real poignancy; but he doesn’t want his audience to feel the emotional discomfort normally associated with this sort of staged disease memoir. He is ambiguous about what he is showing us. Is it trauma? There has been trauma, certainly, but Maney is still young. He is making lifestyle changes. He is managing the disease. People can’t see his MS, he tells us, so he has to explain it. If it is a trauma show, perhaps it’s more the trauma of not knowing how to adequately explain trauma?

White Spots is therefore a shameless confession, but with the shame put back in at an odd and somewhat perverse angle. Shame is a moral problem, but now also an aesthetic problem — or even an ethical problem. Multiple sclerosis is turned in on itself. It is aestheticised: lesions become white spots. It’s a show about the communication of feeling rather than a show for the communication of feeling. The question now is how should Maney feel about how we feel about how he feels about his diagnosis? And then too also how should we feel about making that question the premise of a Fringe show?

The work, then, unfolds in a dreamlike collage of uncertain postdramatic skits. Confounding yet undeniably intimate atmospheres suggest an otherworldly lounge act, or a chancy combination of self-help and stand-up. Or it’s like a thaumatrope blending humiliation and epiphany, naivety and guile.

White spots. Or is it blackness with holes. A black box full of holes. A skull full of stars. The beams move themselves with spotlight swiftness into crevices of the brain. His real problem, says Maney, is that the spots are affecting only the eloquent and sophisticated areas of his personality. The crude, low-brow areas work fine.

The opening is chaotic. Cables don’t fit. The sound isn’t working. The technology has failed. David Maney blushes and stalls and doesn’t seem to know what to do next. Someone rushes out to buy a missing part while Maney launches hastily, reading some text from the back of the programme. Pity is tenacious. By folding the problem of shame in on itself, pity is only displaced, not abolished. It is shifted to a different plane. We don’t feel sorry for Maney because he has a terrifying disease, we feel sorry for him because his show is falling apart. This is very generous of him, to make this shift; he willingly sacrifices the moral high ground of victimhood. If Maney is a romantic — and almost certainly he is — he does not make a romantic drama of his suffering.

And still Maney is ahead of us. We soon discover that the catastrophe is staged. The ruse is well executed. Perhaps too well. How should we feel about such a trick? Clearly his purpose is not to humiliate the audience. Indeed, Maney is unstintingly affable. There’s plenty of audience participation, but most of it gentle and affirming. More than anything he wants us all to be good friends. Is this the meaning of the ruse? A way to break the ice, and then we move on? 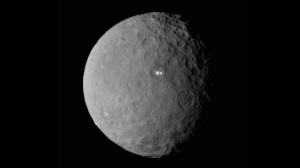 A large white spotlight is aimed at a scrim. It looks like a full moon hanging in a night sky. Maney lounges behind the scrim. It looks as if his silhouette is lounging in the moon. Oh, the moon shone bright on zany Mr Maney. We hear the sound of gentle waves. Maney’s silhouette is talking on the telephone, talking to his – now-ex – girlfriend. Something about the tsunami. Something about numbness in his legs. And then we move on.

He grins all the time. He ums and ers, hems and haws. His anecdotes meander, silliness and affected social awkwardness prevail. Everywhere absurdity gets between the public and the personal. He performs the “The Dance of Dave”. Again, we’re told the technology has failed. The audio backing track won’t play. He wants the audience to stand in. This time we’re suspicious; but, because we’re all good friends now, we oblige. We chant Dave Dave Dave and he lays down some cheesy rhymes. There are many such skits. There are many such Maneys, as elusive as they are absurd.

This is a play about dealing with shock; but Maney doesn’t treat his diagnosis as if it hides a special truth. He describes White Spots as a funny trauma about letting go. Letting go of what? Of trauma itself? Or perhaps of the tendency to treat life always as though it needed to be affirmed by trauma? That is, he is reacting against the tendency to treat the life as if it were secondary to the trauma, as if there were no life without the affirmation of pain. Is he letting go of the authority of the survivor?