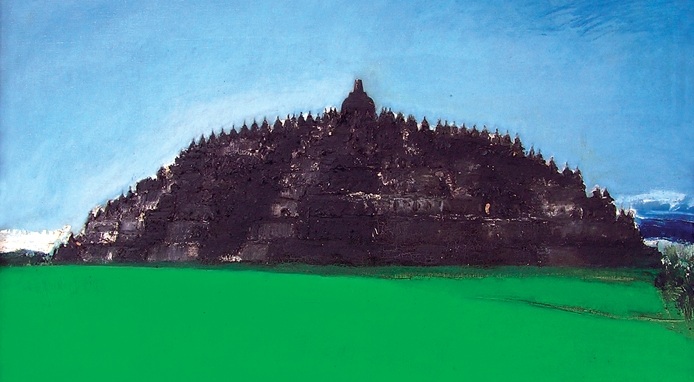 Darkness. Dull rumble, vibratory tremors. Then a thin, human sound, like wailing. Then silence. A soft light. It’s dawn after a night of noise and confusion. We hear the calling of birds. Eko Supriyanto stands motionless on a raised platform. Beneath him is the machine, hidden from the audience by a short black curtain which skirts the platform.

Supriyanto is known in Indonesia for his mastery of classical Javanese court dance and for his many international contemporary dance successes. Indeed, according to the program for Solid States, he joined Madonna for the Drowned World tour in 2001. Here, he wears a kind of traditional Javanese cap which I think is called a blangkon; he has also a loose-fitting mesh singlet and light blue jeans with a floral strip.

He remains motionless, staring intently. His left leg slowly turns out and extends. So very slowly. The extension in particular seems to take an age. This is an exaggeration and a comment on the Javanese court style: slow, precise and graceful. He shapes elegant forms and stylised gestures to an atmospheric soundscape of dribbling beats and electronic scrapings. We notice the fingers, the shapes, distinctly South East Asian, the Hindu-Buddhist legacy. Our appreciation has a touristic aspect; but there’s also a partially exposed personal drama at play. Eko was first introduced to court dancing by his grandfather, also a dancer, and the problem of negotiating old and new, of connecting the new with the old, has an important family dimension.

The floor of the platform begins to thrum. Supriyanto bounces lightly, knees flexed. I wonder about connections between classical Javanese dance and earthquakes. Both earthquakes and volcanic eruptions are regular occurrences across the Indonesian archipelago.

Could these natural disasters have come to entangled with ideas about the inevitable transience of political and religious institutions? According to the program notes –

An important aspect of traditional Javanese culture is the attempt to give stability to society and to individuals within a universe that is inherently instable.

Has the unstable island landscape exacerbated this anxiety? Is tectonic catastrophe a reoccurring symbol in Javanese art and culture? It is interesting that the Javanese court dance style is sometimes said to have an introspective quality, oriented toward self-understanding. When the earth shakes, it’s like a message from beyond, like comment from on high. It is the kind of absolute judgement that turns even unsuperstitious minds inward.

A solid beat emerges from the irregular trickle of Marc Appart’s sound design. Supriyanto stands on the platform before the vestigial proscenium at the back end of the performance space, about eight meters from the first row of the audience; it looks almost like he is standing in front of a gaping mouth. The silhouettes of the lighting rig and footlights look like broken teeth. The hum of the machine under the platform is like a hungry rumble. And there’s a yellow light at the back of the theatre that seems to emanate from a tunnel below our line of sight. I think of that mythic terror which is sometimes also a desperate desire: the earth yawning, swallowing, overwhelming.

Supriyanto takes off his blangkon and carefully sets it down at one end of the platform. His performance becomes more self-conscious. He literally watches himself, observing the way his own body moves between new forms and old. His face becomes more expressive. Is that a look of restlessness or impatience? His movements are increasingly loose. The light shifts – and there’s a brief passage of robot street dancing.

Now Supriyanto takes off his shirt. His poses are heroic, but coloured with a kind of knowingness, as if the warrior culture referenced in traditional court dances can no longer be taken entirely seriously. Is he acknowledging the gap – or exploring the ironic space – between today’s world and the culture which gave rise to classical dance?

Supriyanto flexes his biceps, tenses his abs. He turns heroic forms from ancient through to modern along an axis of macho posturing. In an interview with the Jakarta Post, Supriyanto says:

I chose dance because I didn’t like soccer and basketball. My school friends abused me and called me a sissy. Perhaps it was because they assumed dancing was a better choice for girls.

And then, hey, now suddenly we’re outward looking: pelvis pulsing in a slow groove, torso doubling over, skin bunching on the ribs. And the platform is rocking. Now the pace of the dance increases as new images jostle through the isolated, partially silhouetted figure: bits of what looks like a jungle story, fragmentary romantic gestures, both arms flailing like a swimmer in deep water. Blaring soundtrack. Thudding machine. Supriyanto moving sideways across the platform, trying to flow with the rapid vibrations. Ratatatat. Then black out.

In the second half of Solid States, the platform is turned around through ninety degrees. So while Supriyanto’s performance created a distanced, horizontal, almost cinematic effect, when Melanie Lane takes to the stage she is thrust down much closer to the audience as if on a promontory.

Lane, a Melbourne-based choreographer whose mother is Javanese, is more demonstrative in her performance than Supriyanto. She brings urgency, not virtuosity. Her fingers don’t trace the courtly shapes; they flash through them like knives. And so Supriyanto’s internal struggle becomes extroverted in Melanie Lane.

We notice particularly the martial poses. In fact, Lane is on a war footing. She holds herself low to the ground, as if resisting the instability and pushing back against the platform. We get great views of shockwaves moving up her legs in her calves, over her knees, through her thighs. The platform meanwhile begins to drift away, unmoored, carried off stage by its own vibrations.

Who can resist the destabilising machine of cultural globalisation? When the clamour is done, Lane lies panting on her stomach, dress rucked at her waist, thighs raised at tilting angles, black briefs sparkling in the light, like miles and miles of gleaming ruins, a thousand years long.